As most of you know, I’m a southerner. I’m a Tennesseean. I’m a Volunteer. Most days I’d say I’m a proud southerner, Tennessean, and Volunteer. Lately, however, the number of those days has declined.. Somewhat drastically.

I need not recount the tradition of racism, sexism, homophobia, and other injustice that has dominated and continues to dominate narratives about the South (and rightfully so). I have recently, however, been trying to reconcile the realities of that tradition with my own beliefs about, aspirations for, and experiences in the South. I know these people, this culture, and this place well enough to understand the depth of the unjust traditions, but I also know it well enough to know that is not the entire story.

In racial justice movements, we often talk about providing more than a single story. We are constantly trying to rewrite the narratives about people of color, women, gay folks, undocumented Americans, other countries and continents, etc. It is rare that we stop to rewrite the narrative about white people. Now many may ask why this would be necessary? Hasn’t our society already re-written (aka whitewashed) our history to provide images of noble, righteous, well-meaning, superior, white people? The answer to that is a resounding yes. Nonetheless, there are parts of white history and tradition that deserve a second look.

This is where author Tim Wise and his book White Like Me are helpful. In his book, written to white people about his white experience, Tim discusses the importance of re-writing the narrative of white and southern traditions. He explains how we often see tradition as something pre-determined for us. Something that we have no control in shaping, but must either wholly reject or wholly adhere to. He then proceeds to illustrate a third definition, along with examples of some little known southern traditions. Check it out…

“Tradition is, after all, what we make it. The definition of the term is simply this: ‘a story, belief, custom, or proverb handed down from generation to generation.’ There is nothing about the word that suggests tradition must be oppressive, or that it must necessarily serve to uphold the status quo. It’s simply the narrative we choose to tell ourselves, and as such, could just as easily involve resistance to oppression or injustice, as the perpetuation of the same.
..In the South, for instance, too many white folks cleave to the tradition of the Confederacy, and one of the battle flags most commonly associated with it. But that is not because the Confederacy is southern history, or synonymous with South. Rather, it is because of an ideological choice those white southerners make to align themselves with that tradition as opposed to the other, equally southern traditions with which they could identify.
..White southerners could choose to identify with and praise the 47,000 whites in Tennessee who voted against secession- almost 1/3 of eligible voters- or the whites in Georgia whose opposition to leaving the Union was so strong officials there had to commit election fraud in order to bring about secession at all… Instead of venerating Jeffesron Davis, the Confederate president, we could praise the brave women who marched on Richmond in 1863 to protest his government and the war… Or the 30,000 troops from Tennessee alone who not only deserted the confederacy but went and joined the Union army, so changed their beliefs became over time.
..White southerners could choose to venerate the tradition of the civil rights movement, which rose from the South and lasted far longer than the confederacy… We could choose to identify with the tradition of resistance to racism and white supremacy by black southerners… but also by white southerners.”*

*You may notice most of the facts I chose to include pertain to Tennessee (and Georgia). Personal bias is acknowledged, but not apologized for in this case. Go Vols! Check out the book for more examples.

Wise goes on to note the important, and intentional, absence of these traditions in the more popular narratives about white southern tradition. It is through our ignorance to the resistance that we succumb to the  tradition of injustice. Unless we are made aware of the resistors, we cannot identify with them and uphold the tradition they’ve created.

It was not until recently that I discovered this side of southern history, and the discovery has been incredibly powerful for my ability to re-write the narrative I have about what it means to exist in this body and in this place. Even more powerful for me was the experience of meeting another white, female, Tennessee native and UT graduate that has committed her life to the work of undoing injustice. She provided me with a picture of who I can be. She showed me that I can be proud of my background, love Tennessee football, cherish my southern roots, and still boldly speak out against the parts of our culture that are unacceptable. I never understood the importance of role models that look and sound like us until I met Charlotte. I now know for certain what I didn’t know before- that I have a place in this movement, that I have something to give, and that I am not destined to fall back into society’s expectations of a white southern woman. So thank you, Charlotte. And thank you, Tim Wise.

So my fellow white people, my fellow southerners, my fellow Tennesseeans and Volunteers, I urge us to continue this ‘alternative tradition.’ Let’s educate others about this part of history- not as a way to ignore or diminish the opposite side of this tradition (which would be counter-productive at best, an act of white supremacy at worst), but to call other white southerners in to this tradition. As a way to re-write what it means to have that identity. We are not the first people to speak up about injustice with a southern drawl. And I have faith that we will not be the last. 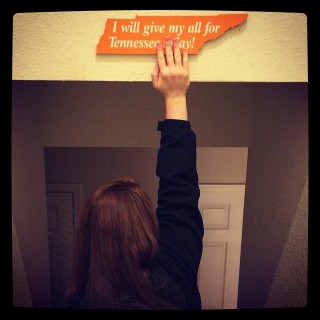 View all posts by Lauren Kinnard